A Truth Or Dare birthday package for 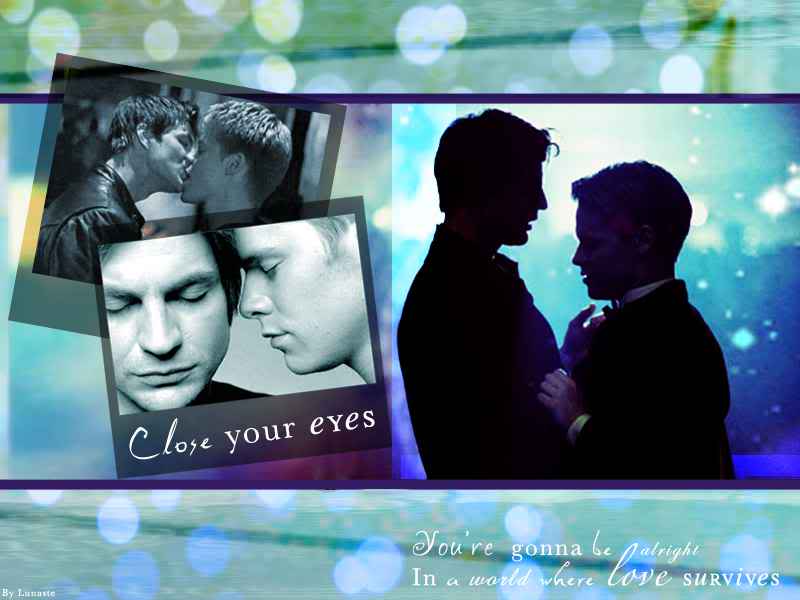 May you have the best birthday of your life this year, and remember:

Every time Brian kisses Justin a fangirl is wishing you a Happy Birthday!


AND NOW FOR THE PRESENTS 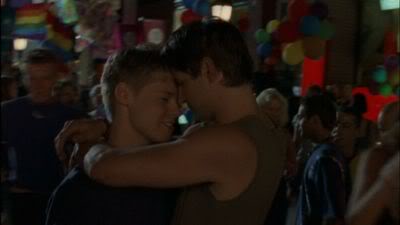 Four simple words. Innocuous enough one would think. But that's how it all began. That's how the truth invaded my life.

I trailed him out of Woody's, more than certain I didn't want to spend the rest of Pride weekend indulging in my wicked ways. Tapping him on the shoulder from behind, I surprised him when he turned around and saw it was me.

"Shut up," was his gut reaction, hardly believing I'd actually passed on fucking some random guy in the bar.

I grabbed his hand and pulled him back toward me, the thought of what Chris Hobbs had stolen from him never far from my mind. "I promise you won't forget this one." Walking him into the center of the crowded street, I draped my arms over his shoulders as we slow-danced, utterly content to be there with him.

Justin smiled up at me. "Do you hear this, Brian? It's one of my favorite songs."

I knew it was sung by ABBA, but I'd never paid any particular attention to it before. "Yeah," I said. "It's good."

"But the lyrics. They're so perfect for where we are right now."

"Dancing in the middle of Liberty Avenue?"

"Just listen." He started to mouth the words along with the song. "I'm a shoulder you can cry on. Your best friend, I'm the one you must rely on. You were always sure of yourself. Now I see you've broken a feather. I hope we can patch it up together."

Kissing him slowly when the chorus played, I mourned his lost memories. "You'll get through this," I whispered in his ear.

"I know, Brian. I love you for being here for me. We'll get through this together."

Nodding, the lump in my throat prevented any kind of verbal response. He didn't expect one, yet, strangely, I found myself not loath to the idea of offering one. Swaying with him to the strains of ABBA, I rested my forehead against his, not wanting this lesbianic moment to end.

Months earlier, I'd strolled into his prom, searching for him amid a sea of dressed up eighteen-year-olds. Taken aback at the sight of him all decked out in his tux, I led my handsome partner to the middle of the floor for a dance, determined to give him a night he'd never forget. We pulled off some pretty fancy footwork in front of his classmates and their chaperones, boldly ignoring all societal norms while we kissed passionately at the end of the song.

Setting out to give him the night of his life, it had turned into the night of my life as well, for it was then that I knew I loved him.

Justin drew me out of my reverie during our Pride dance by hugging me tightly into his body. He peered up into my eyes. "I bet if you believed in love, this is what it would feel like."

Never one for effusive displays or confessions, I guessed the world wouldn't come to an end if I answered honestly when he kissed my lips and asked, "Don't you think so?"

Holding him fast against my beating heart, the truth was unexpectedly painless. 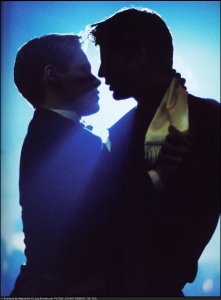 mander3_swish
Timeline:mid season 1
Summary: Justin has some fantasies rolling around in his head, and Brian is essentially dared into helping him out.
Rating: NC17
Word Count: 880
Alphabet Meme Prompt: D is for Dare
A/N: Written for the lovely

techgirl_on_ij’s birthday!!! Happy Birthday! I hope you have a super fantastic day!

In this year of sexual explorations and firsts, courtesy of the master himself, Justin’s fantasies of what he wants to try next seem to be endless. Practically out the blue one evening (when he really should be studying), Justin dares Brian to call Emmett up to borrow his smashing ensemble from that first night at Babylon...the shimmery pink bare-mid-drift top along with the fabulous tangerine leather pants.

“Why the fuck would I want to do that?” Brian questions as he walks down the steps from the bedroom, still towel drying his hair, without so much as a towel wrapped around his waist.

“I dunno? I guess it would be fun to see you so out of character, and to see everyone’s reactions when you walk into Babylon. Come on, just call him!”

“Hold on minute. First, who said I’d be leaving the loft in such an atrocious ensemble. Second, I’m still waiting for the real reason.”

“What are we, twelve? If you don’t tell me why you have some twisted fantasy about me dressing up as Emmett, then it’s certainly never gonna happen,” Brian reasons, although he has a pretty good idea why, but he wants Justin to admit it out loud so he can see the desire blush across his face.

“Fine, but you have to promise not to laugh in my face.”

Justin rolls his eyes, takes a deep breath, and lets it out slowly. “Ok. So. I really think it’s time I get a chance to try topping,” Justin starts, and Brian raises an eyebrow and is about to interject when Justin presses on, “but since I know that’s bound to never happen with you, I was thinking Emmett might be a suitable replacement...since you’re both...tall.”

Brian figured that had something to do with it. “Okay...but I’m still wondering what the outfit has do with it.”

“It’s probably me just mixing up fantasies in my head. God, there’s so many that they want to tumble out all at once.”

“Fuck,” Justin moans as Brian’s hand strokes up and down his leaking cock. “You. Always you.”

Brian produces a condom and tears open the wrapper with his teeth, of course, and rolls it down Justin’s shaft. He coats his own fingers with lube, and is about to press the first finger in when Justin grabs his wrist.

Justin positions Brian so he’s kneeling facing the back of the sofa. He takes the bottle of lube and dribbles some of the liquid into his left hand. As he slides a finger gently inside of Brian’s hole, he can barely believe this is really happening. This was not how he ever imagined this evening would go. And the fact that Brian took little, if any, convincing to this present scenario is even more mind-boggling.

“Are you going to be stuck like that all night, or are you going to get on with it?” Brian’s words snap Justin back into the here and now. He shakes his head at himself, wondering how he could ever get distracted while he had a finger in Brian Kinney’s ass.

Justin ‘gets on with it’ and adds another finger. He hears a sharp intake of breath from Brian and moves his free hand to caress Brian’s back. “You alright?” he asks.

“Fine,” Brian curtly replies, and pushes back onto Justin’s fingers, sending them deeper inside of him.

When he’s pretty sure that Brian is prepped enough, Justin slicks his condom clad cock and lines up at Brian’s hole.

Brian is letting him fuck him.

Justin’s not sure how long he’s going to last as he feels like he could just come from the pure anticipation of it all. He steels himself and moves his hips forward, his cock breaching Brian’s entrance. Once he’s fully inside, he leans down and places soft kisses across Brian’s shoulder blade. He then starts a slow, pulsing pace, his hands grasping tightly to Brian’s hips, and he’s certain that’s the only thing keeping him grounded.

His cock drags across Brian’s prostate, which causes Brian to clench his ass around Justin. This pushes Justin over the edge, as he was nearly gone when he first pushed in. He comes hard in the condom, but manages to reach around and give Brian’s cock a few strokes, who then comes seconds later.

Justin pulls out gently, removes the condom and ties it off, and tosses it in the direction of the garbage bin by Brian’s computer desk. They both collapse onto the sofa in a tangled heap, trying to process the sensations and emotions coursing through their bodies. There’s no going back. Brian is Justin’s first in every way possible, and Justin’s quite happy with that fact. In fact, he thinks it’s just perfect.

“I still think it would be hilarious if you dressed up like that.”

“Not going to happen in this lifetime, Sunshine.”

Lots of love!
from